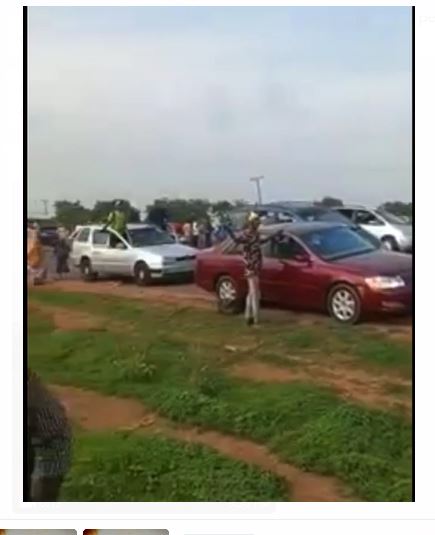 Stranded Vehicles on the Abuja-Kaduna Highway During Terrorists Attack

In Kaduna state, many travelers are feared kidnapped after suspected terrorists reportedly attacked the Abuja-Kaduna highway along Kateri general area on Tuesday.

Some commuters are also feared dead as the the terrorists reportedly shot sporadically during the attack which took place at about 4:30 PM.https://www.tvcnews.tv/purplegold/post-new.php#

Although the Kaduna state government and police authorities are are yet to acknowledge the incident, videos posted by witnesses show that some victims sustained gunshot wounds including children.

The incident comes barely fifty days after terrorists ambushed a Kaduna bound train on the 28th of March, killing at least eight persons and kidnapping several others according to government authorities.https://www.tvcnews.tv/purplegold/post-new.php#

It also comes less than 48 hours after the Nigerian Railway Corporation (NRC) announced that train services will resume on the 23 of May.

For now it is still unclear how many victims of the train attack are held hostage but in a recent video released by the terrorists, at least 62 persons including children could be seen.

Terrorists had turned the very busy Abuja-Kaduna Highway to their playground over the last 7 years with hundreds of people having been killed or kidnapped for ransom.

The development had led those who can afford it to take a short flight to Kaduna from Abuja or take the Abuja-Kaduna Passenger Train Service which had provided succour to people who travel to and from Kaduna to the nations’ capital.

The safety record of the Abuja-Kaduna Passenger Train Service came under repeated threat from Bandits/Terrorists  before it was eventually breached in March this year.

The attack led to the death of 10 people while several Others were abducted.

Many of the over a hundred abductees in the attack are yet to regain freedom.

The Train service is however expected to resume on the 21st of May while many of the abductees are still in captivity, a development members of their families have kicked against.

Adesina says AfDB duties will not allow Presidential run in 2023

2023: US threatens visa ban on promoters of violence in Nigeria’s election