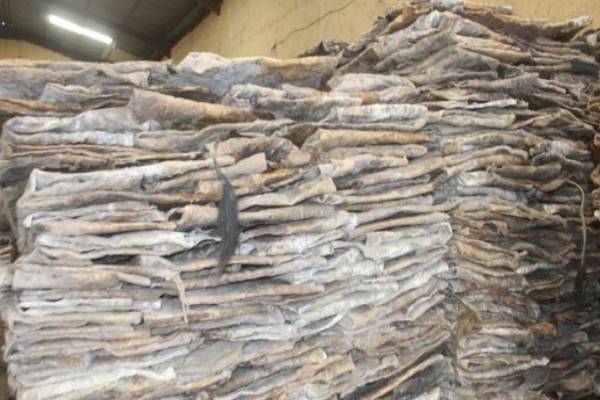 The National Agency for Food and Drug Administration and Control (NAFDAC) has intercepted significant quantities of harmful animal hides and skins commonly known as Ponmo in Lagos, with seven dealers caught in the agency’s net.

Director General of NAFDAC, Prof. Mojisola Adeyeye, cautioned the general public, particularly Ponmo consumers, about the activities of some unscrupulous businesspeople and traders who sell industrial animal hides as food.

Prof Adeyeye said that NAFDAC Investigation and Enforcement staff quickly gathered intelligence about various places where the accused items were being warehoused and distributed, according to a statement released by Sayo Akintola, NAFDAC’s Resident Media Consultant in Lagos on Sunday.

This was in reaction to a number of public complaints about the purported sale and distribution of imported hides and skins intended for use in the leather industry that had already been processed with industrial chemicals. These hides and skins are subsequently sold to the general public as Ponmo.

In light of these findings, she stated that the Agency recently conducted investigative raids on some specified places in Lagos State where market women and men were found congregated for the purchase of warehouse leftovers.

Prof Adeyeye stated that substantial quantities of the hides (120 tons) were intercepted at six separate sites, emphasising that seven people who were allegedly involved in the acts are presently being investigated.

The NAFDAC chief went on to say that samples of the items had been sent to a laboratory for testing in order to determine the product’s quality and unwholesomeness. According to her, the intervention would assist the Agency in dealing with the interactions and risks linked with the intake of these items.

“The street value of the product currently intercepted is estimated to be around N25.330m only’’, she said.

She also warned that the hides are pre-treated with industrial chemicals that are not food grade and will be toxic and harmful to human health, emphasizing that the health risks inherent in the consumption of such animal hides include the risk of Liver, Kidney, and Heart damage, as well as an increased risk of Aplastic anemia, Central nervous system toxicity, and Cancer, amongst other things.