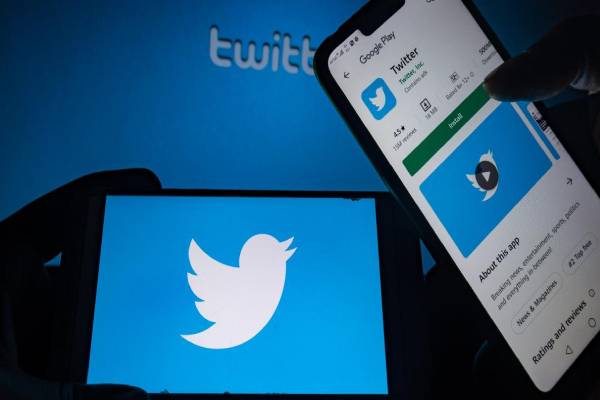 Microblogging site, Twitter has applauded the Federal Government’s decision to lift the restrictions placed on it since June 2021.

The National Information Technology Development Agency (NITDA) said in a statement on Wednesday that President Muhammadu Buhari “has approved the lifting of the suspension of Twitter operation in Nigeria effective from 12 am tonight.” 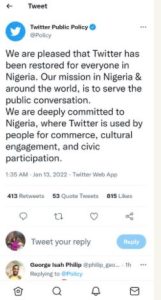 “We are pleased that Twitter has been restored for everyone in Nigeria. Our mission in Nigeria and around the world is to serve the public conversation,” Twitter’s Public Policy team said in a tweet on Thursday.

“We are deeply committed to Nigeria, where Twitter is used by people for commerce, cultural engagement, and civic participation,” the tech giant Tweeted.

The site became accessible in Nigeria Thursday after the government lifted a seven-month ban on the social media network.

Nigeria shut down Twitter after a comment by President Muhammadu Buhari was deleted, sparking an international outcry over freedom of expression.

But the presidency said the move had nothing to do with the social media platform’s action.

“There has been a litany of problems with the social media platform in Nigeria, where misinformation and fake news spread through it have had real-world violent consequences. All the while, the company has escaped accountability,” presidential aide, Garba Shehu, said in the wake of the suspension.

“Major tech companies must be alive to their responsibilities. They cannot be allowed to continue to facilitate the spread of religious, racist, xenophobic, and false messages capable of inciting whole communities against each other, leading to the loss of many lives. This could tear some countries apart.”

The United States, the European Union, and Canada were among those who condemned the ban as a threat to freedom of expression in Africa’s most populous country, joining human rights organizations in doing so.