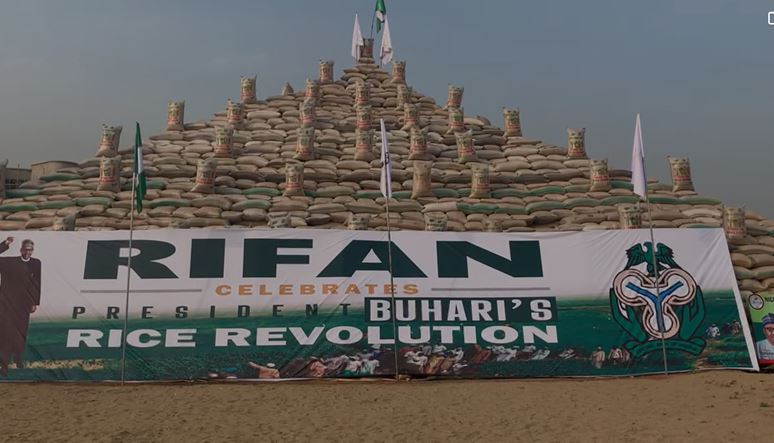 Rice pyramids consisting of one million bags of paddy have been unveiled in Abuja.

The pyramids , which are a first of their kind on the continent are a fallout of the Central Bank of Nigeria’s Anchor Borrowers Programme.

The bags of rice paddy were off-taken by the apex bank, from farmers who benefitted from the programme as repayment for their loans instead of cash.

They are to be sold to rice millers at subsidized rates in what the CBN describes as efforts to control the price of the commodity.

Meanwhile, President Muhammadu Buhari, says the commissioning of the one million bag , paddy rice pyramids, shows the country is steadily advancing towards self-sufficiency in food production.

The president, at the pyramid unveiling in Abuja, advised agriculture commodity associations, yet to participate in the Anchor Borrowers’ Programme to do so in support of the nation’s food sufficiency target.

He is glad the country’s integrated rice mills have increased from fifteen to over fifty and is positive more jobs will be created when two additional ones in Lagos and Katsina begin operations.

The president, commends the Central Bank’s efforts at reviving the country’s Commodity Exchange following his approval and expects this to result in farmers having ready buyers for their produce, thereby eliminating farm to market logistic challenges.

We will soon be self sufficient in Rice production – President Buhari