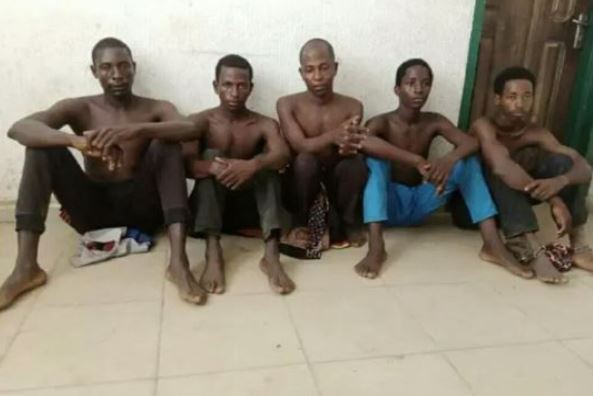 Five members of a notorious kidnap gang have been arrested by professional hunters in Okehi Local Government Area of Kogi State,

The suspects were apprehended in an early morning operation at Atami, a suburb of Osara community on Tuesday.

According to King Habib, Senior Assistant to Okehi LG Chairman, Hon Abdulraheem Ohiare Ozovehe on Media & Publicity, who confirmed the arrest in a statement, said the gang has been terrorizing Kogi State’s Okene-Lokoja and Okene-Auchi roads.

According to the statement, the suspects are currently being held by security forces while an investigation to retrieve their sophisticated weapons is underway.

The suspects are: Tukur Saleh, Ahmadu Sanni, Yusuf Sanni, all from Bauchi; Abubakar Saleh (Baba Wuro) and Isah Saleh, both from Kano State.

“We shall leave no stone unturned in a bid to rid Okehi LGA and our environs of all forms of criminality,” Hon Ohiare said.