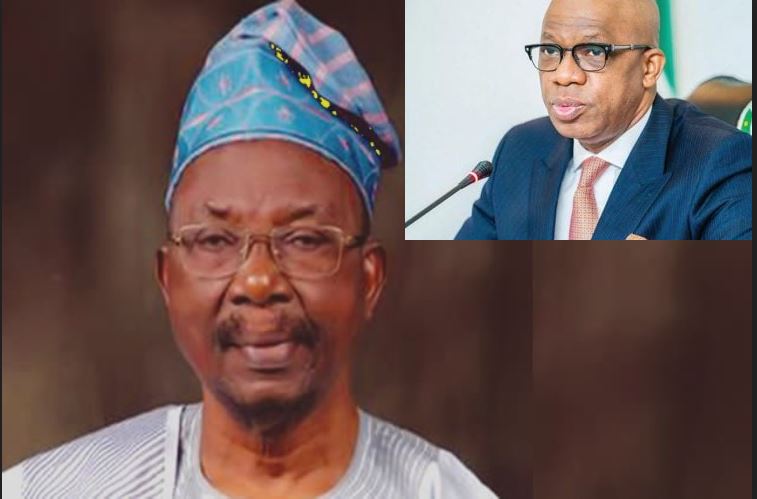 Ogun State Governor, Dapo Abiodun, has mourned the death of elder statesman, former Chairman of the Nigerian Communications Commission (NCC), and a leader of the All Progressives Congress (APC) in the state, Senator Olabiyi Durojaiye.

Senator Durojaiye who was a leading member of the pro-democracy group, NADECO, was also in the National Assembly between 1999 and 2003 on the platform of the Alliance for Democracy.

He died on Monday night in Lagos, after a brief illness at the age of 88.

Abiodun, in a statement on Tuesday by his Chief Press Secretary, Kunle Somorin, expressed shock over the passage of the Ijebu-Igbo politician.

“He was with us during the Stakeholders meeting for the Ward Congress last month and was a strong pillar of our Administration,” the governor was quoted as saying.

Gov. Abiodun described Sen. Durojaiye’s death as a great loss to the progressives, the political ideology he identified with and represented while alive.

Abiodun said Durojaiye was an elder statesman and formidable economist, lawyer and banker, who was elected member of the 1988/1989 Constituent Assembly.

“He will be greatly missed in the political circle of not only Ogun State, but Nigeria,” the governor further said.

He noted that the Senator was a political giant whose politics was devoid of bitterness.

He added that apart from being a consummate politician, Chief Durojaiye was also a community leader who loved his community and contributed to the development of Ijebu Igbo, Ijebu North Local Government and Ogun State.

Abiodun lamented that Senator Durojaiye died when Ogun and Nigeria needed his vast experience in politics, leadership and service most.

“A good man, a patriot, who lived a good life, a life of commitment and decency has passed on”, he said, praying that “God grant you eternal rest Distinguished Senator Olabiyi Durojaiye”

While commiserating with the immediate family of the former presidential aspirant, Gov. Abiodun, prayed God Almighty to forgive his shortcomings and grant his family the fortitude to bear the irreparable loss.

“Our dear Senator was a good man, a patriot, who lived a good life. A life of commitment and decency has passed! May God grant you eternal rest Distinguished Senator Olabiyi Durojaiye. Adieu and rest on”, the governor concluded in the statement.