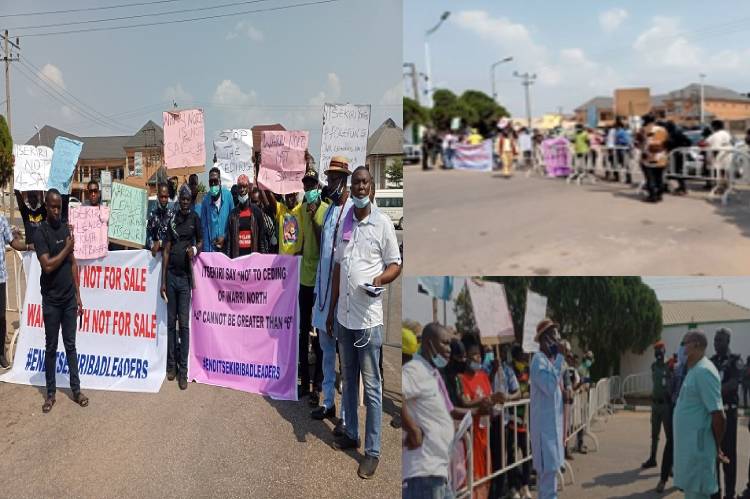 Protesting Itsekiri youths on Tuesday marched on the Delta State Government House in Asaba, the State capital, to protest the alleged ceding of Warri North chairmanship seat to Ijaw.

They said Governor Ifeanyi Okowa and other leaders of the Peoples Democratic Party (PDP) from Warri North were masterminding political tension in the area.

The protesters vowed to use legal means to stop the ceding of Warri North chairmanship to Egbema Ijaw, insisting that all interested aspirants should be allowed to purchase forms and be screened.

They carried placards with inscriptions like “”We will never recognise any ceding of Warri North chairmanship to Ijaw”; “Warri North, stop the trading of Itsekiri”; “Itsekiri leaders, the youths can’t breathe”.

The angry  protesting youths were assuaged when Senior Political Adviser to Governor Okowa, Chief Funkekeme Solomon, commended them for being peaceful, assuring that their grievance would be communicated to the governor with a view to resolving it.

Mr. Mone Oris, who spoke for the protesters, said instead of the PDP Electoral College with 25 persons, which should select candidates through primaries, only ‘two people masterminded the process from their homes and choose a candidate without consulting others in the council’.

He called for a PDP primary to be conducted by the 25 stakeholders to select the right candidate and allow a level playing field for all to participate.

President of Movement for the Protection of Iwere Homeland, Development and History (MPIHDH) James Aderojor stressed that Warri North chairmanship can’t be ceded to non-Itsekiri. He added that if the decision is not reversed, political peace will not be enjoyed in the area.

Mr. Solomon, who addressed the protesters, described the governor as a man of peace ‘who believes in fairness and equity across’.

He praised the youths for their peaceful disposition while assuring that their protest will reach the Governor.