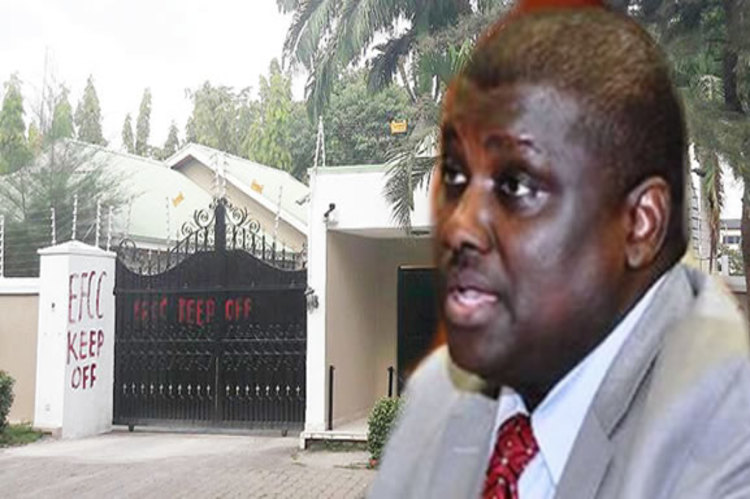 The witness, who is an EFCC detective revealed that a prosecution witness, Adamu Modibbo, who testified to the EFCC regarding the said Jabi, Abuja property, allegedly died of Covid-19 after his statement to the Commission.

Maina Bought a $2m Property in Abuja, Others in Dubai, USA – Witness

She also revealed that about 32 documents, hard discs and flash drives relating to properties linked to Maina and his family and details of some of his investments in Dubai and in the US were recovered from him.

“Particularly in Dubai, investigation revealed that his company, Northrich Company owned over 50 cars that were used for transportation business and he owns a villa in a High Ground area in Dubai.

We also recovered pay slips during our investigation,” she said.

The witness also disclosed that investigation proved that another of Maina’s company, Kangolo Dynamic does no business but that the defendant created a bank account for it in which his name did not appear anywhere on the account documentation even though he was in control of all the deposits in it.

She also told the court that investigation showed that Colster Logistics, belonging to Maina had a Fidelity Bank dollar account which had an inflow of over $400,000, 00 (Four Hundred Thousand Dollars) from cash deposits as at the time the company was investigated.

She further told the court that over N500 million was discovered in the account of Kangolo Dynamic, within the years Maina was chairman, PRTT.

According to the witness, in the course of the investigation, letters were written to the Federal Road Safety Corps, FRSC, to verify the authenticity of the driver’s license used in opening some of the accounts Code of Conduct Bureau (CCB) for Maina’s declared assets; Federal Civil Service Commission, Office of the Head of Service of the Federation (HOSF) and Accontant General of the Federation, (AGF), to confirm if Maina was still a civil servant and for his pay slips.

Also written was the Federal Inland Revenue Service, FIRS, for the tax returns of his companies and the Corporate Affairs Commission (CAC) for the registration documentation of the companies and their annual returns.

Justice Abang upheld the prosecution’s prayer, noting that opportunity was offered to the defendants to be in court to oppose the admissibility of the document in evidence, but they failed to appear and also failed to engage counsel of their choice.

Justice Abang adjourned the matter till December 4, 2020, for continuation of trial.

Maina is being tried in absentia, having jumped bail and refused to present himself for trial.