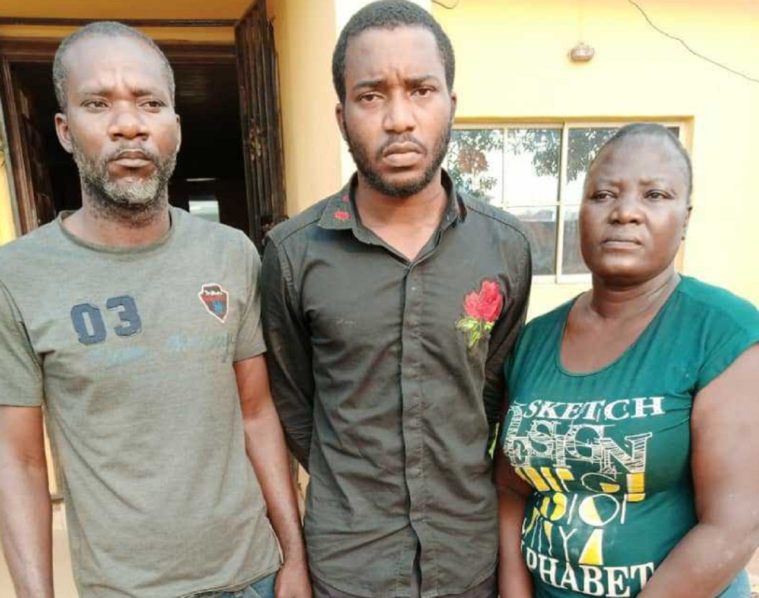 Police in Ogun State have paraded three suspects arrested for the killing of a final year student of the Lagos State University for ritual purpose.

They are 23-year-old, Owolabi Adeeko, his mother Bola Adeeko and a pastor of a white garment church, Segun Philip, who was alleged to have led the ritual process.

The Commissioner of Police, Ogun State Command, said a young man connived with a pastor to use his girlfriend for money ritual for himself and his
mother. He alleged that the boy lured the victim from Lagos to Ikoyi-ile near Ikire in Osun State and killed her with the assistance of a pastor.

The mother of the lead suspect said she ate the concoction prepared by the pastor who was praying for her but she never knew she was eating human
heart. She added that his son introduced the pastor to her for prayer for blessings and turnaround in her business.

For the pastor, he confirmed that he led the ritual process and that his actions were alien to the teachings of the bible. He said he did it because he needed money and he later realised that the ritual wasn’t working because after completion, the spirit refused to bring money.

For the father of the victim, it was a big loss.

The suspects will soon be charged to court. Meanwhile, the Commissioner of Police appealed to parents to always monitor their children and keep them away from desperate people with negative mindsets about life.

Huawei gets approval to take part in 5G trials in India