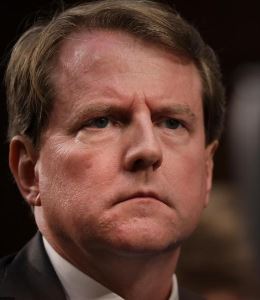 A U.S. district judge has ordered Donald Trump’s former White House counsel Don McGahn to testify in the impeachment hearings despite claims that he had “absolute immunity” as a top presidential adviser.

In an order issued Monday U.S. District Court Judge Ketanji Brown Jackson said McGahn “is not immune from compelled congressional process” and “had no lawful basis for refusing to appear for testimony pursuant to the duly issued subpoena issued to him by the Committee on the Judiciary of the United States House of Representatives on April 22, 2019,”

The report cites McGahn’s description of efforts by Trump to compel him to fire Mueller, evidence of what Mueller described as a potential attempt by Trump to obstruct justice by blocking the special counsel’s investigation.