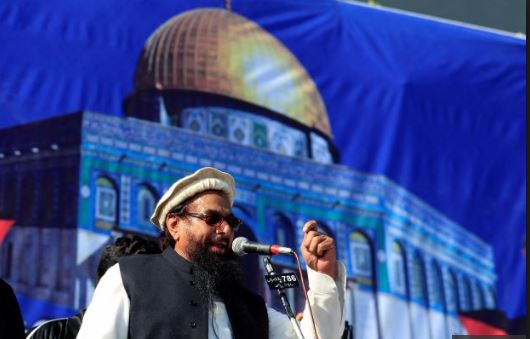 Pakistan has re-instated a ban on two charities linked to the founder of an Islamist militant group that has carried out attacks in India, the interior ministry said on Friday.

The ban comes as Pakistan faces international pressure to act against militant groups, amid escalating tension with its nuclear-armed neighbor, India, following a suicide bomb attack on Indian police in the disputed region of Kashmir.

The attack, in which 40 Indian paramilitary troops were killed, was claimed by the Pakistan-based Jaish-e-Mohammad (JeM) militant group.

The two banned charities are linked to founder of another prominent Islamist group, the Lashkar-e-Taiba (LeT).

Pakistan’s National Security Committee, made up of top military and civilian officials, decided late on Thursday to ban the charities liked to LeT founder Hafiz Saeed, who has long been on a U.N. international terrorism blacklist.

The United States and India have blamed the LeT for numerous deadly militant attacks, including a four-day siege by gunmen in the Indian city of Mumbai in 2008 that killed 166 people.

The United States has offered $10 million for information leading to Saeed’s his arrest and conviction.

“It was decided during the meeting to accelerate action against proscribed organizations,” Pakistan’s interior ministry said in a statement.

Saeed, who denies being the mastermind of the Mumbai attacks and says he has no links to militant violence, has maintained that the two charities – the Jamaat-ud-Dawa (JuD) and Falah-e-Insaniat Foundation (FIF) – are vital for helping the poor and have no militant ties.

JuD spokesman Yahya Mujahid said the two groups would turn to the courts to overturn the latest ban.

Saeed has been placed under house arrest several times over the past decade but he has always been released after a few months and has mostly been living freely in Pakistan, to the anger of both India and the United States.

Pakistan has long banned the LeT but for many years allowed its charity wings to operate an extensive network including 300 seminaries and schools, hospitals, a publishing house and ambulance services.

Pakistan last year banned the two charities but the order was temporary and it lapsed.

India has ratcheted up pressure on Pakistan since the Feb. 14 attack in Indian-administered Kashmir.

Three UK Conservatives quit party in protest at “disastrous Brexit”
India accused Pakistan of having a hand in the attack. Pakistan denies that.

Pakistan has also been placed on an international watchlist for failing to curb terrorist financing.