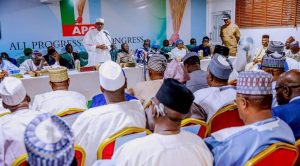 Politicians are divided in their opinions about the comment of President Muhammadu Buhari directing security agencies to be ruthless on ballot box snatchers. While some believe that such order may cause more harm than good, others say they see nothing wrong with it.

TVC News Kazeem Olowe reports that the order of President Muhammadu Buhari that security agencies should be
ruthless with ballot box snatchers has been generating reactions from politicians.

Segun Sowunmi, House of Representatives candidate of the Peoples Democratic Party and the Spokesperson of Atiku Abubakar Presidential Campaign Organisation is one of those faulting the position of the President, claiming that it connotes negativity.

The Chairman of the Inter-party Advisory council in Ogun State, Abayomi Arabambi also shared similar opinion. But a member of the All Progressives Congress in Ogun State, Adekunle Adeyemi said he sees nothing wrong with the statement of the President.

Although, the Spokesperson of Atiku Campaign Organization kicked against the statement but he admitted that the intention of the President was not to encourage extra judicial killing.

Despite their differences, the politicians say they are all against ballot box snatching and election rigging in the country.