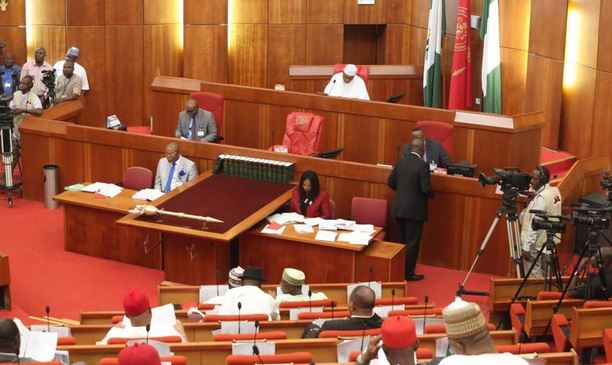 The motion to investigate a $3.8 billion oil subsidy budget allegedly spent by the Nigeria National Petroleum Corporation, NNPC, generated a rowdy session on the floor of the Senate on Thursday.

The lawmakers have set up an ad-hoc committee headed by the House Leader, Ahmed Lawan, to investigate subsidy recovery fund being managed by the Corporation.

TVC News Correspondent,  Joke Adisa reports that Senator Abiodun Olujimi from Ekiti state drew the legislators’ attention to alleged mismanagement of the subsidy fund totalling 3.5 billion dollars. She alleged that the huge fund is being managed by just two officials of the Corporation without appropriation by the National Assembly

The motion soon divided the lawmakers as the Chairman, Senate Committee on Downstream showed disagreement as Olujimi made her presentation.

Then, former Senate Leader, Ali Ndume, in his contribution, cast aspersions on the Downstream Committee chaired by Marafa, as he expressed doubts it may have been compromised, a comment Marafa did not take lightly

Senate President eventually doused the tension, compelling both men to apologise, after disclosing that the sum had risen from $3.5bn to $3.8bn. He directed the Senate Leader to lead the panel.that will carry out the task but Ahmed Lawan declined

Saraki pleaded with the Senate Leader to take up the responsibility.  The Senate President announced the composition of the committee with a mandate to report back in four days.