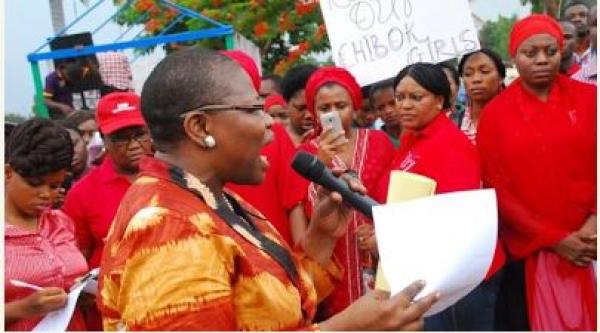 The bring back our girls campaigners are calling on the Nigerians to join them in fervent prayers for the 195 Chibok girls who still remain in captivity.

This comes as the group marks the 1000th day of the Chibok girls who still remain in captivity.

TVC NEWS’ Kemi Balogun reports that it’s been 985 days, months and years of sitting at the unity fountain campaigning for the rescue or return of all the missing Chibok girls

It all started after 219 girls were abducted on the 14th of April 2014, in a school in Chibok Borno state.

And almost 3 years on, only 24 girls have returned home leaving 195 still missing

Through rain or shine, the bring back our girls group have have pressed tirelessly to keep the matter of the girls on the front burner of the Nigerian government and in the consciousness of the global community.

Some of the parents of the missing girls have over the period, found comfort in the group because there had been times of intense sadness and extreme frustration as well as occasions of extreme joy.

Through it, both the parents and members of the BBOG remain resolute that more effort must be put into finding and rescuing the girls.

This is the 1000th day of the abduction of the girls, and the group is determined to keep on pushing for the need to rescue the remaining 195 school girls who still remain missing and pledge not to relent until the government does more.