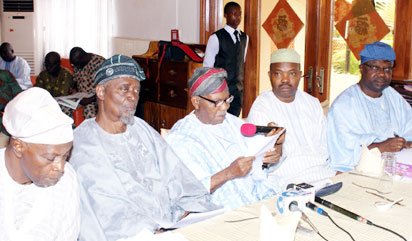 The pan-Yoruba socio-cultural organization, Afenifere wants President Muhammadu Buhari to relieve all the Ministers fingered in corrupt acts by some Judges recently accused of corruption and arrested by the Department of State Security (DSS) of their duties with immediate effect.

The group also tasked the National Judicial Council (NJC) to investigate all the allegations of corruption leveled against the Judges, with a view to ensuring that the erred ones are prosecuted.

Rising from its monthly meeting held at the residence of its leader, Reuben Fasoranti in Akure , Afenifere expressed its readiness to join President Buhari in his fight against corruption adding however that the fight must be fair and balance.

The Publicity Secretary of the organization, Mr Yinka Odumakin who read the communique issued at the end of the meeting said Afenifere is determined to ensure that it uses all machinery to ensure that all the Ministers fingered in corruption are properly investigated.

Also, the mainstream Yoruba organization warned Fulani herdsmen against attacking Ekiti State over the law enacted by the State government banning grazing activities in the state.