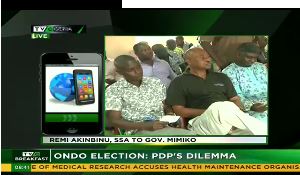 TVC N. The Senior Special Assistant ( SSA ) to Governor Mimiko in person of Remi Akinbinu has said, ‘the decision to jail the corrupt judges is bound to fail as it is a fraudulent judgement. He said this during a phone call interview with TVC Breakfast Show on Tuesday ( 18th of October 2016). He continued by saying: ‘The court shouldn’t have adjudicated on the matter’.

It reported that a Civil Society Group, has demanded that all Judges recently arrested and released by the Department of States Security Services, DSS, be given a 7-years jail term, if they are found guilty of corruptly enriching themselves, and subverting justice.

According to them, ‎any corrupt Judge found guilty of corruption by any court of competent jurisdiction, should bag jail term of 7 years, in consonance with ‎sections 98, 99, and 494 of the Criminal Code of the Federal Republic of Nigeria, and also, sections 172 & 209, and part 5th schedule, part 1 of ‎sections 6&8 of the amended 1999 Constitution.

While decrying the recent ‎approach of the DSS, ‎in arresting Judges of the Federal High Court and Supreme Court, over ‎corrupt practices, by invading their houses with unconventional weapons,‎ which is inimical to the code of conduct of Security Agents, the Group advised President Buhari to ‎extend its anti-corruption crusade to the State Judiciary of the Federation, where the corrupt practices have been nurturing to the ‎highest ebb.

The Group, speaking through its National Coordinator, Comrade Adeniyi Alimi ‎Sulaiman, said: “The fight against the cancer of corruption in ‎Nigeria, should be dealt with frontally, because the menace has ‎affected every segment of our society, which is impeding the nation’s ‎socio-economic and political development and growth.

“With the ‎revelation from the operation of the men of the Department of State ‎Security Service, DSS, that millions of naira was met in the houses ‎of the affected Judges, thorough, credible, and unbiased investigation ‎should be conducted into the whole saga, and all the affected Judges ‎should be prosecuted according to the law of the land.

“But, by not ‎following the rule of law in the fight against corruption, may be capable ‎of disturbing the struggle against the menace.

“By now, the Judiciary, particularly, the Bench, should purge itself of ‎corruption, which has been in the highest ebb in the arm of government, ‎because with the happening in the Judiciary today, our country is ‎going to extinction.

“The Bench that are supposed to be in the vanguard ‎of crusade against corruption now, soiled its hand with the bribery ‎scandal, and no fewer than seventy–five percent (75%) of Nigerian ‎Judges, since 2007, are billionaires through ill-gotten wealth.

It concluded, by calling on the President, to strengthen the anti-graft agencies, such as the ‎Economic and Financial Crimes Commission, EFCC, and Independent ‎Corrupt Practices and Other Related Offences Commission, ICPC in order to be able to track 21st century financial crimes.

What do you think about this?

PDP: ‘Party problem will linger, unless Makarfi and Sherrif settle their differences’ – Adetokunbo