Wike pledges to complete all ongoing projects in Rivers

Wike pledges to complete all ongoing projects in Rivers

Rivers State Governor, Nyesom Wike, said his government will complete all infrastructure projects in the state. He made the promise during a visit by some traditional rulers to the Government House, in Port Harcourt.

Uche Okoro reports that although the Opobo council of Chiefs  paid a solidarity visit to the Governor, it was not surprising for discussions to revolve around the development and welfare of Opobo-Nkoro Local Government Area.

Addressing some of their concerns, Governor Wike reassured the royal fathers that the State Government will complete and deliver the Ogoni-Andoni-Opobo-Nkoro Unity Road as part of the first year anniversary of his second term.

He announced the immediate release of additional funds to contractors for completion of the work. 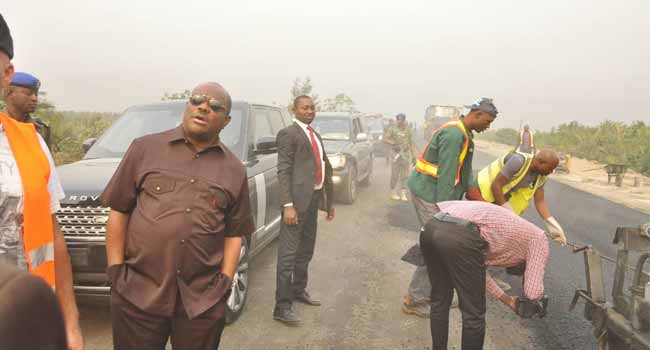 The Governor commended Amayanabo of Opobo, Dandison Jaja for his role in making the Local Government one of the most peaceful in the state.
Adding that sustainable development can only be achieved in an atmosphere of peace.

In his remark, the king gave thumbs up to Governor Wike for stepping up the delivery of projects during his second term.

On the shoreline protection project for the area, Governor Wike said plans are being made to retrieve N1.9bn from an indigenous contractor who abandoned the job.