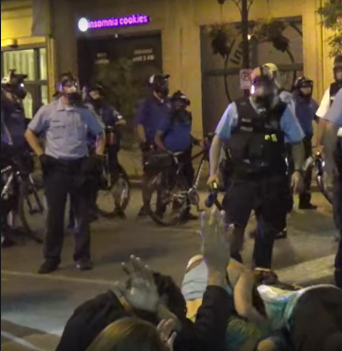 Four U.S police officers have been charged over the beating of an undercover officer they thought was a protester at a street demonstration.

According to reports, the St Louis police officers thought the undercover agent was a street demonstrator.

The group, who allegedly kicked and used a riot baton on the detective, have been suspended without pay.

The protest took place in St Louis, Missouri, following a “not guilty” verdict in the murder trial of Jason Stockley, a white former police officer who shot dead a black man, Anthony Lamar Smith, in 2011.

A judge later ruled police conduct that night had violated demonstrators’ constitutional rights. Officers arbitrarily declared the gathering unlawful even when there was no violence, the judge said, and there was “no credible threat of force or violence to officers or property” when police rounded up people including journalists.

The four were working in the department’s civil disobedience team in September last year when they attacked the undercover detective, who they believed was a protester.