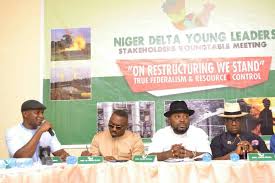 A group of youths from the Niger Delta region has stressed the urgent need to restructure the country along economic lines before the 2019 general election.
This was one of the resolutions reached at the Niger Delta Young Leaders Stakeholders forum that held in Port Harcourt, the Rivers State capital.

The group is also calling for one hundred percent control of oil resources by the Niger Delta describing this as the only solution to agitations for development in the region.

Just In: Southern Governors arrive for second summit in Lagos