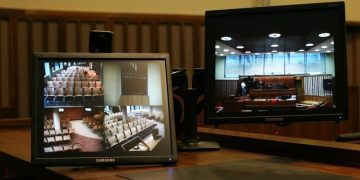 In a unanimous judgment of the Court, Justice Olabode Rhodes-Vivour declared that as at today, virtual court sitting is not unconstitutional.

The 7 member panel of the court held that the suit filed by the attorney general of Lagos state is speculative and the court does not act on speculation.

The Attorney General of Lagos State had asked the court for an interpretation of section 274 of the constitution which empowers the CJN and heads of court to give practice directives to the court.

The bill to pass virtual court proceedings into law has scaled through the 2nd reading at the senate, this the Attorney General said is an infringement on section 274 of the constitution.

He note that the cause of action for the suit arose from section 39 of the constitution which gives every citizen of Nigeria right to fair hearing.