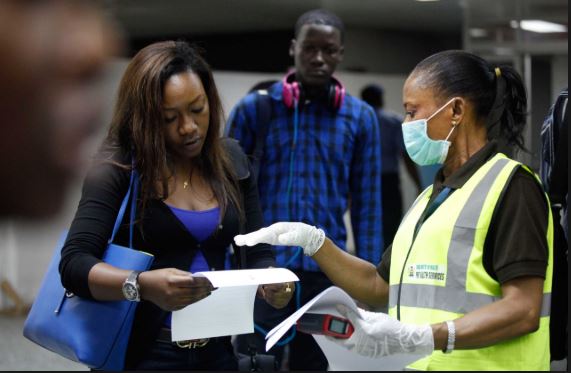 The Director, Media and Public Relations, Federal Ministry of Health, Mrs Boade Akinola says the Federal Government has ordered a total health surveillance at ports, borders to guard against Ebola.  She made this known in a statement issued on Friday in Abuja.

She said that the Permanent Secretary of the ministry, Mr Abdulaziz Mashi, gave the directive in Lagos while inspecting health facilities at the Murtala Muhammed International Airport, Lagos.

The permanent secretary with some directors from the ministry, and Nigeria Centre for Disease Control (NCDC) inspected the health facilities.

She added that the inspection was to ascertain the level of preparedness in case of any emergency following the rumored Ebola threats in Lagos.

Mashi noted that the “Thermal Cameras” used to screen incoming passengers into the country are functioning perfectly.

He, therefore, reiterated Federal Government’s commitment to increase the number of cameras and deploy more manpower as a result of heavy traffic at the airport.

He said “more doctors, nurses and other health officials will be deployed to the port health services at International Airports for day to day activities.”

The permanent secretary appreciated the efforts of Lagos State Government on preparedness and surveillance system against the Ebola virus.

He said the ministry and Lagos State Ministry of Health had been working together to forestall importation of any disease into the country and called for continuous collaboration.

Federal Ministry of Health, therefore, urged the public to disregard the rumour and discourage the circulation of any unverified information.

The ministry said that since the reports of outbreak of EVD in the Democratic Republic of Congo, heightened surveillance had been ongoing at various points of entry to prevent importation into Nigeria.