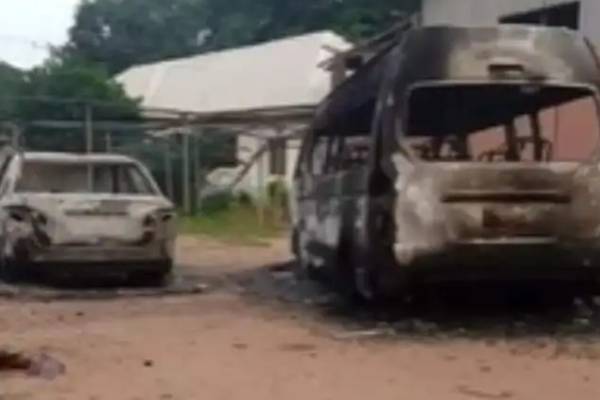 The Premises of the Anambra Broadcasting Service (ABS) Awada, Onitsha station has been attacked by suspected gunmen early Monday Morning.

The gunmen reportedly stormed the station around 2.15am, burning a building and two vehicles, comprising the company bus and another vehicle belonging to a staff who had worked overnight.

Although no life was lost in the attack, The arsonists brutalised the staff they met on ground, inflicting injuries on them.

A staff at the station, who pleaded anonymity, said he witnessed the attack, having worked all night.

He said: “There was an attack. In fact, one of the gunmen ordered another to kill those present, but he refused and we were mercilessly flogged.

“Two vehicles were burnt, the Studio was equally torched, including a mattress belonging to one of the staff.”

He however revealed that some of them were currently undergoing interrogations by security agents as part of investigations into the attack.

Confirming the incident, Anmabra State Police Command spokesperson, Tochukwu Ikenga said it was a case of arson, saying no life was lost.

He however added that two operational vehicles belonging to the station were affected.https://www.tvcnews.tv/purplegold/post.php?post=198349&action=edit#

He said, “Following a distress call today 30/5/2022 at about 4:30am of a case of arson in Anambra State Broadcasting Station Idemili North, the Police Operatives responded swiftly and prevented the hoodlums from causing damage on the structure.

“Unfortunately two of operational vehicle belonging to station was affected. No life was lost.

“Meanwhile, the station has been cordoned off and operation is still ongoing in the area. Further development shall be communicated.”

Anambra State has been in the throes of attacks from suspected IPOB Gunmen since the re-arrest of the leader of the proscribed group, Nnamdi Kanu, following years on the run after jumping bail.

The group had declared a regular Sit-At-Home anytime he is appearing in court and on Mondays to demand his release from what the members say is aribitrary detention by the Nigerian State.