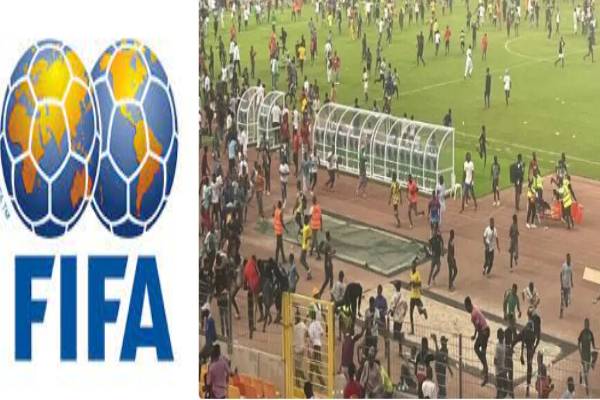 The Nigeria Football Federation has been fined by football’s governing body, Fifa, for a pitch invasion following the Super Eagles’ 1-1 draw with Ghana in a 2022 World Cup playoff on March 29.

Enraged Super Eagles fans had flooded the ground at the Moshood Abiola National Stadium in Abuja, after the final whistle, forcing police to use teargas to remove them.

There were clashes between supporters and the security force, and advertising boards were defaced. 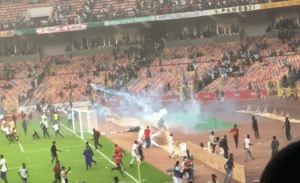 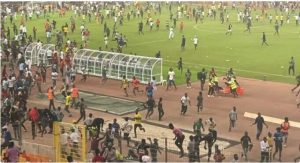 The players from Ghana and Nigeria were pelted with debris and forced to fight their way into the locker rooms.

Fifa says it has reviewed the official match report, and a statement issued by the organization on Monday confirmed that the Nigeria Football Federation has been fined CHF 150,000.00 (roughly N64m) for their supporters’ disruptive behavior.

The association, based in Zurich, also mandated that the Super Eagles play one competitive encounter behind closed doors.

“Order and security at matches (failure to follow current safety standards and guarantee that law and order is maintained in the stadium, invasion of the playing field, and hurling of objects),” Fifa stated in a statement.

Next month, the Super Eagles host Sierra Leone in the first match of their 2023 Africa Cup of Nations qualifying campaign.

Last month, the Senate summoned the Minister of Youth and Sports Development, Mr. Sunday Dare, the NFF President, Amaju Pinnick, and other agencies involved in the MKO Abiola Stadium’s maintenance to assess the degree of the damage to the national arena’s amenities.

The senators also directed the Senate Committee on Sports and Youth Development to look into the long-term and short-term causes of Nigeria’s failure to qualify for the World Cup despite massive funding from the government, individuals, and corporations.

Eid Fitr: Sultan urge leaders to be more compassionate on the populace

Finland to decide NATO membership application on May 12