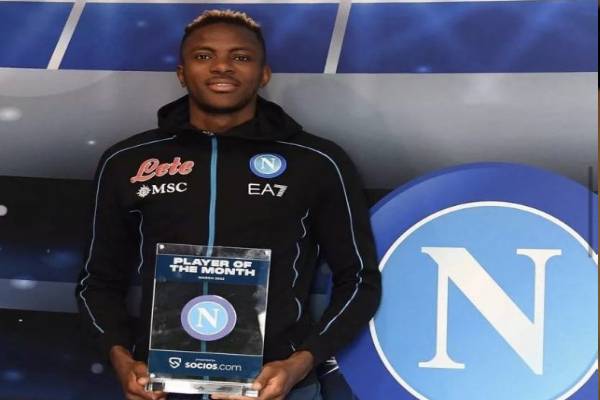 Super Eagles striker Victor Osimhen has been crowned Napoli’s best player for the month of March.

According to reports, the 23-year-old forward was voted the Parthenopeans’ player of the month for March in a vote conducted by the club’s fans.

The award follows his recent recognition as Serie A Player of the Month for March.

The Nigerian striker, who has been in terrific form for the Italian clubs, scored four goals in his past three games for the Naples side in the month under review.

After losing their top-of-the-table battle with AC Milan 1-0 at the Diego Armando Maradona Stadium, Luciano Spalletti’s side bounced back with victories over Verona and Udinese, with Osimhen scoring a brace in each match.

The club praised the striker on Twitter after he received the most votes and was named best player of the month.

“The March Player of the Month as voted for by fans on @SociosItalia is Victor Osimhen. #ForzaNapoliSempre,” reads a tweet on Napoli’s official Twitter handle.

Despite an injury-plagued season, Osimhen is still Napoli’s leading scorer, with 12 goals in 22 league games.

Osimhen will look to add to his current goal tally when Napoli travels to Empoli on Sunday.