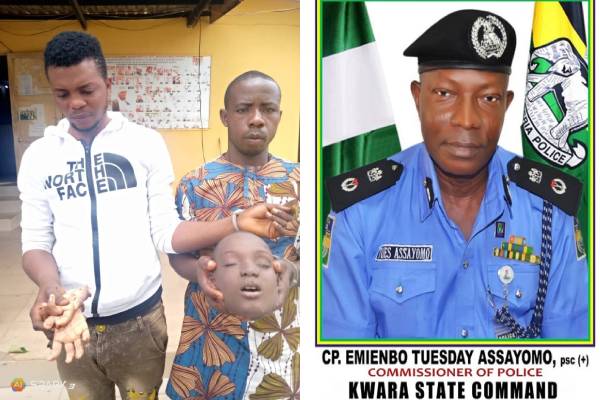 Policemen attached to Operation Harmony of the Kwara State Police Command have arrested two suspected ritual killers who were intercepted on a motorcycle and found with a bag containing fresh human head and hands.

The arrest was made on Sunday, April 24, 2022 when the police operatives were on routine patrol along Oke Oyi/Jebba Road at about 11:30am.

The arrested suspects were identified as Wasiu Omonose,35, of Abioye Compound, Share Town, and Akanbi Ibrahim, 32, of Sayo Street, also in Share.

The Command’s Public Relations Officer, SP Okasanmi Ajayi, who disclosed this in a statement, said the suspects tried to evade the officers who were on stop-and-search duty, arousing suspicion.

“Consequently, the suspects were hotly chased and forced to a stop. In the process of searching them, a bag containing a fresh human head and hands were found in their possession,” SP Ajayi said.

When interrogated, Omonose and Ibrahim confessed they were taking the fresh human head and hands to an Alfa in Ilorin for ritual purposes.

The state Commissioner of police Kwara State, Tuesday Assayomo, while condemning the act of inhumanity, warned criminal elements to relocate from the state, as the police command would not fold its arms and allow crime perpetrators to truncate the peace and harmony being enjoyed in Kwara.

The police commissioner added that anyone or group of persons attempting to initiate the breakdown of law and order in the state will be dealt with and made to face the full wrath of the law.

Assayomo restated his determination to prosecute the suspected ritual killers as soon as investigation into the case is concluded.