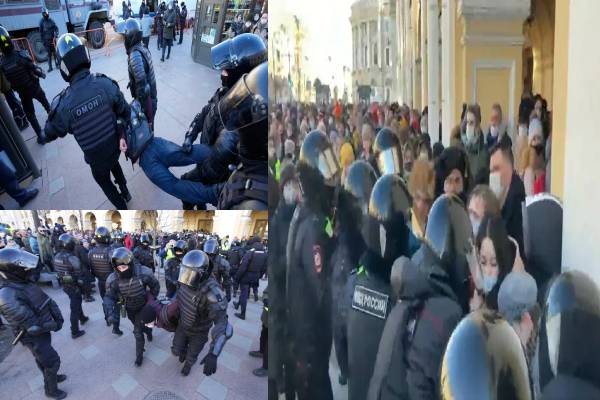 Thousands of anti-war protesters in Russia have been detained by police in at least 59 different Russian cities, according to latest reports.

According to a monitoring group, 4 366 people were arrested during anti-Russian invasion protests in 56 cities.

Over 3500 people have been arrested, according to Russia’s interior ministry. The vast majority of arrests have taken place in Moscow, where 1 700 people have been apprehended. Furthermore, the ministry confirmed that over 5000 people took part in the protests.

The last time Russia had such a large number of arrests was last year, 2021. Thousands of citizens had called for the release of opposition leader Alexey Navalny at the time. Navalny was apprehended shortly after returning from Germany, where he had been poisoned with a nerve toxin.

Short reports on the protests were carried by Russian media that has been dubbed’ state-controlled.’ Despite the fact that it was clearly a large-scale undertaking, they were omitted from the spotlight.

Authorities allegedly ‘liberated’ Manezhnaya Square in Moscow after arresting participants in an unofficial rally against the Ukraine incursion, according to one such agency.

In the meantime, Ukraine’s President, Volodymyr Kelensky, has confirmed that another Russian missile strike occurred on Sunday. The President verified the attack on Vinnytsia in a video released to Kelensky’s official social media website. Eight missiles were fired at a small airfield, which was entirely destroyed, according to reports.

Restoring displaced persons in northeast is an urgent assignment – Osinbajo