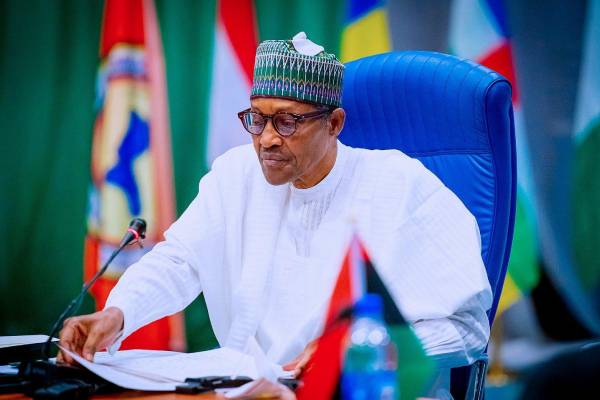 President Muhammadu Buhari warns the leaders (and membership) of the All Progressives Party (APC) to desist from name-calling and backstabbing ahead of the oncoming March 26 Convention, remain steadfast and maintain its unity if the party is to continue in the path of victory and its dominance at all levels throughout the country.

President Buhari asks the members to look at the once-powerful, “main opposition” Peoples Democratic Party (PDP) now enfeebled and adrift and learn lessons in disunity, mismanagement and corruption.
”They failed in 16 years in power and a failure as opposition.

”“Yes, we are entitled to our own share of dissent and intra-party discord. These are common in all parties, left and right all over the world.

”But parties splintered by competing egos destine themselves to the worst possible fate,” the President warned.

”As the country prepares for the long run up to the 2023 presidential election, we all expect a robust debate on the issues that matter and what is going in the APC should be a reflection of this, not the infighting we are seeing. There must be no more distractions ahead of the convention to choose new leaders.”

He recalled that the APC started out with a confidence of victory and the party today enjoys that confidence in nearly two-thirds of our 36 states.

Yet, he noted, this is a party that has been in existence barely for eight years, becoming the dominant party because it has thrown open its doors to defectors from other parties, big and small.

This alone, addition to the fact ”we didn’t start on the note of arrogance of power, nor see government as a vehicle for self-aggrandizement, to be held at all costs, but a vehicle to bring development to all without discrimination-political, ethnic or regional to our dear country made this success possible.”

The party, he went on to note, is proud of the fact that in its short period of existence, it has won two general elections decisively and despite losing a few states in 2019, it steadfastly expanded its pan-Nigerian outlook with significant defections of the opposition Governors and parliamentarians into its fold.

”Given all that is at a stake, we can expect contests into offices as we are now faced with to be heated although candidates and their promoters for party offices are not so much debating policy differences but differences of management, personality, character, and suitability for the most important leadership roles in our country and therefore the continent.”

It is equally clear that over the last week or so, the internal management affairs of the APC have been afforded generous media coverage – over and above its importance to the voters of Nigeria.

It is important to ask what benefits the poor are getting during the period of intense negative coverage.

When precisely the party’s convention is held and who is the party’s chairman is hardly a matter for the average voter: vastly more important is who convention delegates will elect as the party’s flagbearer in the coming weeks to take forward the party’s platform to the people in the general election in February next year.

It is therefore important for the media to put such matters into perspective. No-one is debating policy differences here. That is for the general election. None of the declared aspirants and any of those that may step forward will change because of who may be in the party in the chairman’s seat. It is essentially the same party.

Of course the media are welcome to comment on the content of the character of the potential APC candidates; discuss their suitability for leadership; scrutinize their offer to the membership. But to focus on the routine internal divisions and magnify them into what they have become today is a waste of everyone’s time, amounting to no more than a discussion over seating arrangements.

This is not what Nigerians talk of in their communities. They have an inclination only for things that matter.

Nigeria set to receive 6th batch of returnees from Ukraine