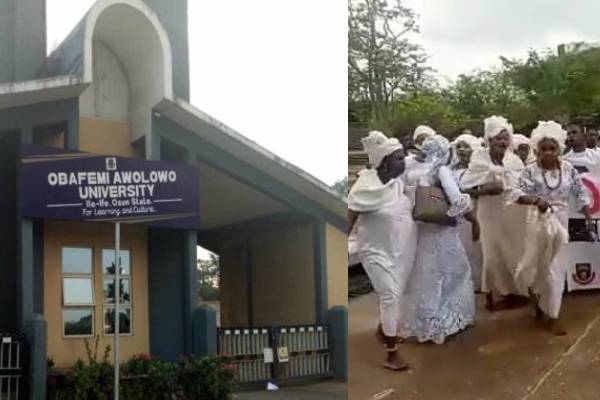 President of the Ife Development Board, Lawrence Awowoyin has said that indigenes of Ile-Ife were protesting the appointment of a vice chancellor at Obafemi Awolowo University because they were concerned about indigenes being being short-changed for appointments and promotion within the university community.

Despite the presence of highly trained indigenes working in the system, Awowoyin stated that crucial and strategic managerial posts in the university had been purposefully denied the community.

He emphasised that, despite popular perceptions, the community has no issues with Prof. Adebayo Banire, the newly appointed vice-chancellor.

He also stated that the community of Ile-Ife was not attempting to force its son on the university.

But added that, the community claimed their so,n, who was running for Vice President, was cheated out of the process. As a result, he asked the Federal Government to launch an investigation into the matter and ensure that due procedure was followed in the selection of the new VC of the University.

Apart from the ongoing property disputes between the community and the university, Awowoyin, who is also the Obalufe of Ile-Ife, stated that “there have been challenges of appointment; even advancement of the persons working in that particular spot has not been all that simple.

“The main roles at the institution; for example, how many sons have served as DVC? That is not the same as the Vice Chancellorship, department heads, and other positions.

“At one point, we inquired why our sons and daughters couldn’t be VC. They stated that this is due to the fact that your sons and daughters do not wait their time to qualify for it. We had a qualified son this time, but he was not appointed. The question was raised as to why he was not appointed; is it because he is unqualified or because he was set up?

“The community believes they schemed him out, which is why the community is asking that the Federal Government or a third party look into the process of appointing the Vice-Chancellor, particularly the final phase of the exercise.”

However, the university’s Public Relations Officer, Olarenwaju Abiodun, stated that the dissatisfied indigenes should have contacted proper channels of complaint earlier than they did.

He noted that some civil measures have been taken by the indigenes to address their grievances.

“It is quite regrettable that an aggrieved party in this 21st century Nigeria resorts to something primitive, barbaric, and uncalled for.

“If you are dissatisfied in a civilised society, there are various routes via which you might express your dissatisfaction. It is not your intention to beat people, chase individuals away from their duty posts, or even to place sacrifices and charms in a citadel of intellectualism.

“Did they have already made answers for their son or have they bet on the chances that their son would automatically become the Vice Chancellor?’’ Olarenwaju queried.