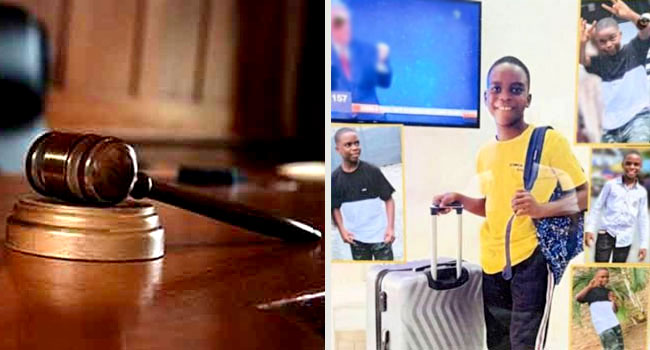 The second witness to testify for the family of the late Sylvester Oromoni Jnr has told the Coroner, Magistrate Mikhail Kadiri sitting in Epe, Lagos who is investigating the controversial death that the 11-year old was treated for malaria at the Oromonis’family home in Warri, Delta State.

Counsel for the family, Andrew Efole led the witness, Peter Odeworitse in his evidence, which has already been documented as his Statement on Oath before the court.

At the last sitting on January 21, the first witness, Clifford Tejire has said he went to the deceased’s school, Dowen College on November 23, 2021 to pick him up after he purportedly sustained injuries while playing football.

He also added that though Sylvester Jnr was in great pains and his condition worsened while he was in his care in Lagos, he wasn’t instructed by the parents to take the JSS 2 student to the hospital but to bring him over to Warri.

At the resumed hearing On Thursday, Peter Odeworitse, a family friend and the operations manager of a company, KenBen Nig Ltd owned by the deceased’s father, said upon their arrival in Warri on November 26, 2021, Mr Oromoni called the family’s doctor, Aghogho Owhojede to come and attend to his son, and that he was treated for malaria for three days.

The witness added that a scan and an X-ray were conducted on him, based on the doctor’s instructions on November 29, which later revealed amongst other things that he had an enlarged liver.

During cross examination by counsel for the Lagos state government, Seun Akinde, the witness said the parents initially arranged with Dr Owhojede to take their son to the Delta State Teaching Hospital, Oghara for further treatment. But, he added that he was later taken to one Vicar Hospital on November 30, where he was said to have died that day.

Mr Odeworitse revealed that the late Sylvester and his mother had gone to their Church for prayers on November the 29th, before the medical tests were carried out.

“They go to Church every Monday for prayers. I saw him in the car upon their return, still in pain, he wasn’t that fit to go to Church.”

The witness was also asked during further cross examination if he knew that the late pupil could have Been showing signs of hallucination or disorientation, which are reportedly among the symptoms of severe sepsis (a serious medical condition caused by the body’s response to an infection) found to have been one of the causes of his death, as stated in the result of the autopsy conducted on him in Lagos. He said he didn’t know about that.

Another counsel, Anthony Kpokpo representing Dowen College, cross examined the witness on the manner he extracted information from the deceased on the alleged torture by some senior students in his school.

“I walked up to him in the car and asked the driver to excuse us. Sylvester Jnr. said five senior students assaulted and tortured him but he only mentioned three names in full (names withheld). I went to tell his mother what he told me and she was shocked.”

But The witness told Lawyer for the Nigerian Bar Association, Bernard Onigah observing the proceedings that he didn’t tell the family doctor about the alleged torture. He also said he recorded a video of the young boy on his way to do the medical tests, as he had already confessed by then, and that it was the mother, Rosemary Oromoni that instructed him to send the video to his school in order to present the the body pains he was feeling.

Mr Odeworitse who said he was at the Oromonis’ Warri home when the deceased was carried into from Lagos , was asked by another counsel, Izuchukwu Ohajinwa, about the boy’s condition when he saw him.

“He was screaming and shouting, he couldn’t walk and was complaining of pains in his waist and leg. There were blisters on his upper lip. His father told Tejire, the previous witness to take him upstairs .”

A mild drama ensued when another counsel, Imah Ayi- Ekpenyong representing one of the accused senior students asked the witness whether he was also a civil servant, as indicated in his police statement, to which he replied that it was a police officer that wrote the statement for him.

“Because I was still in shock (after Sylvester’s death), I gave him all the information which he put down for me.”

Meanwhile, Ayo Shabi from the chambers of a senior advocate of Nigeria, Anthony George-Okoli also appeared in the hearing on behalf the Ijaw Youth Council, Lagos Chapter, seeking to join the inquest.

The court says it will hear their application at its next sitting on Friday.

Citizens, not wealthy Nigerians must benefit from subsidy removal- NGF

Family of ex-President Jonathan’s cousin pleads for his release