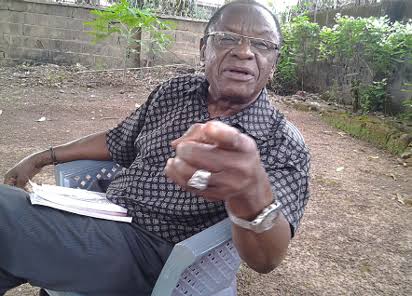 A source closed to the family made public the news of his demise but said the family is yet to formally announce his death.

The deceased was imprisoned when the 1966 coup failed, went to war on the side of Biafra, survived bullllet wounds, and ended up in prison again at the end of the civil war.

In his lifetime, he wrote a book on the Nigerian-Biafran civil war.

Col. Gbulie was popularly known for his role in the January 1966 coup in which he and other majors and captains upturned the political and military status quo in the country.

He was detained in Enugu State alongside Victor Banjo and others who participated actively in the coup by the Federal Government.

He was subsequently released by Emeka Odumegwu Ojukwu at the outbreak of the Nigerian Civil War in 1967.

He rose to the rank of a Colonel in the Biafran Army where he held important positions which included the de facto commander of the 7th battalion, Nsukka, Supply and Transport, and later as the Military Administrator of Aba Province.

We will meet to respond to suspension of Subsidy Removal – NLC President, Wabba