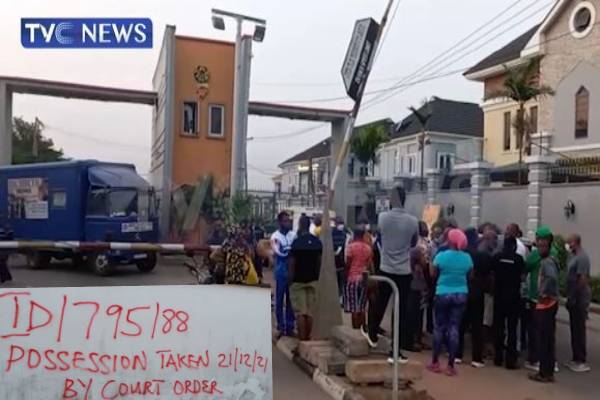 Policemen took over the highbrow Magodo district of Lagos on Tuesday afternoon to carry out a Supreme Court verdict ordering the Lagos State government to return more than 500 plots to the region’s original owners. Panic struck landlords and inhabitants are still stranded at their gates.

The Supreme Court’s judgement, handed out on February 10, 2012, ordered the Lagos State government to return over 500 plots to the original landowners of the area before it was “fraudulently” obtained over 38 years ago.

According to the chairman of the Shangisha Landlords Association, Chief Adebayo Adeyiga, the landlords have no alternative but to execute the judgment after waiting for years for the judgment debtor (Lagos State Government) to comply with the order.

The court had handed them custody of the land on which the buildings were built, according to the inscription on each house.

It could be recalled that the state’s military administration first seized the land for public use, but later sold it to government officials and their friends, prompting the original owners to seek redress through the Shangisha Landlords Association.

The state government, however, continued to sell the land despite the court injunction.

The state government was eventually ordered to give the Association and its members 549 parcels of land as a matter of first priority by the high court in its final verdict.

Robbers suspected of car theft in Lagos, apprehended in Ogun