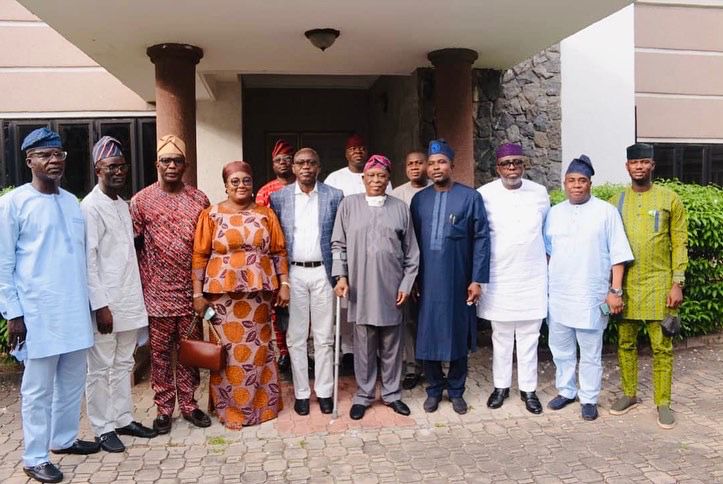 Former Governor of Ogun state, Olusegun Osoba, on Wednesday, hosted members of the Ogun State Executive Council, with a charge to Governor Dapo Abiodun to focus more on projects and programmes that would be of great benefit to the people of the state.

Osoba gave this charge at his Ikoyi residence, Lagos, while receiving the exco members who paid a welcome visit on him on his arrival from the Unites Kingdom after a successful knee surgery.

The former governor expressed delight with the level of development, especially in the areas of road infrastructure, education, health and security, noting “Ogun is lucky to have a man who is focused and have the interest of the people at heart”.

“I want the governor to please continue to focus on projects that will benefit the people. I know he is doing very well on road construction and other sectors; more attention should also be given to security.

“The governor was the first to visit me after my arrival. He showed me what he is doing in the state like the Atan-Agbara road. He is determined to construct the Agbado road. He is also doing massive housing projects to take care of the middle class. Ogun is the fastest growing state in Nigeria because the governor is taking the advantage of our closeness to Lagos”, Osoba added.

He further lauded the present administration on its land reform programme and noted that apart from discouraging land speculators, it would allow the state reap huge benefit from its land resource.

He, however, urged Governor Abiodun to remain resolute in executing sustainable projects across the state.

While thanking the Governor for all his support and words of encouragement, especially visiting him in the hospital before the surgery, Osoba, said, “don’t listen to rumours. Do all that you can. No government can do everything. My prayer is that you will leave Ogun state better than you met it”.

He appreciated the state executive members for supporting the governor in his quest to reposition the state, assuring that he will always support the governor through words of advice when and where necessary, submitting that “the success of the present administration is my success”.

Earlier, the leader of the delegation and Secretary to the State Government, Mr. Tokunbo Talabi, described the former governor as an elder statesman who has the interest of the state at heart

He appreciated God for a successful surgery, declaring that Ogun is happy to see him back on his feet.

“We are happy for your quick recovery. And you are recuperating very well. We have reasons to thank God. You are an elder statesman who has the interest of the state at heart, and you are very supportive of the incumbent administration”, the SSG noted.