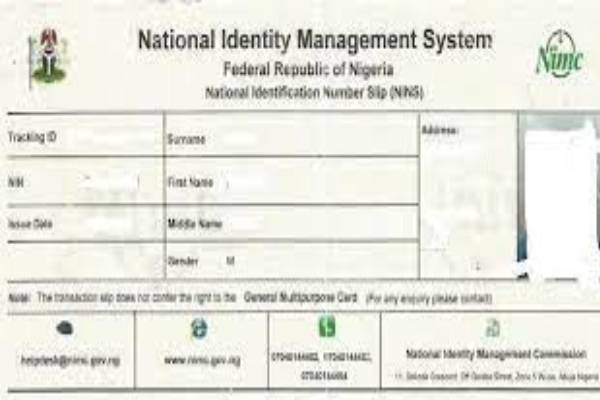 The federal government has introduced a suite of digital Tokens to replace the aging NIN slip and polycarbonate card.

This was stated by Isa Pantami, Minister of Communications and Digital Economy, at a stakeholders workshop on the National Identification Number (NIN) Tokenization Solution hosted by the National Identity Management Commission (NIMC) in Abuja.

He stated that the government implemented the solution to ensure the privacy of individuals’ personally identifiable information during verification transactions and to reduce instances of illegal retrieval, usage, transfer, and storage of NIN.

The Minister, who was represented by the Director-General of NIMC, Aliyu Abubakar stated that full implementation will begin on January 1.

He explained that the tokenisation solution was tailored to protect personally identifiable information as well as the sanctity and sensitivity of the NIN issued by NIMC to registered individuals.

NIN tokens, according to Pantami, are MDA or merchant specific and expire after a set period of time, meaning that a token created for company A cannot be used by company B.

The goal of the program, according to Abubakar, was to rub minds with stakeholders in order to ensure that everyone understood the product and bought in.

Mr.  Tunji Durodola, NIMC’s Technical Consultant, also spoke, saying that the Digital Token was created to replace the 11-digit NIN for everyday use.

The NIMC Director legal, regulatory and compliance compliance services, Hajiya Hadiza Dagabana said there was need for sensitization of the public.

It is only issued by the NIMC and is issued by an ID Holder, either via the NIMC MWS Mobile ID apps or via USSD on a feature phone. A mobile number linked to an In is required to participate.