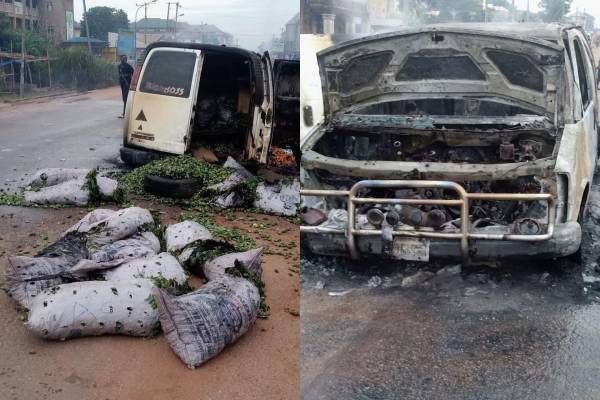 A vehicle conveying vegetables, tomatoes and other perishable foodstuffs was on Monday morning set ablaze by hoodlums in Enugu.

The vehicle was said to be coming from the Ugwogo end of the Opi/Enugu bypass when it was blocked and set on fire.

Although, no life was lost.

Eyewitnesses account attributed it to an act of arsonists, trying to hijack the already cancelled every Monday Sit-at-Home order, that was earlier issued by members of the Indigenous People of Biafra (IPOB).

When contacted, the spokesman of the state police command, Daniel Ndukwe, could not be reached for comments.

But residents insisted that the perpetrators were only trying to instil fears in the minds of the people, who had stopped obeying the sit-at-home order..