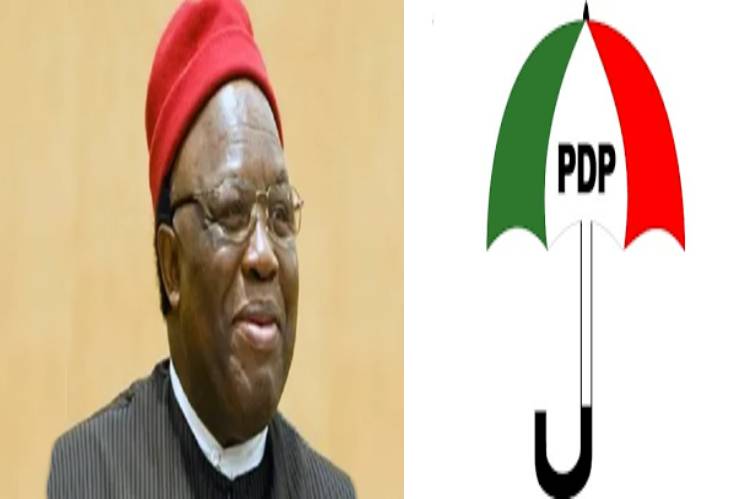 The national leadership of the Nigeria’s main opposition party, the People’s Democratic Party, PDP, has congratulated Professor George Obiozor on his election as the President-General of the Igbo socio-cultural organization, Ohaneze Ndigbo.

PDP described Obiozor as a firm voice in the fight for the entrenchment of democratic tenets.

The party’s congratulatory message is contained in a statement signed by the PDP National Publicity Secretary, Kola Ologbondiyan, on Monday.

Ologbondiyan said: “The PDP congratulates former Nigeria Ambassador to the United States, Israel and Cyprus, Prof. George Obiozor, on his election as the President-General of the Ohaneze Ndigbo,” the statement said..

“The party also extolled the leaders and the people of the southeast for their democratic credentials evinced in the successful election of a new leadership of the apex Igbo socio-cultural organization.

“Prof. Obiozor is a seasoned administrator, excellent diplomat, courageous nationalist and a firm voice in the fight for the entrenchment of democratic tenets of the rule of law, social justice, equity, fairness, mutual respect, true federalism and a credible electoral process in our country.

Obiozor, a former Nigerian Ambassador to the United States, Israel and Cyprus, became leader of the group after an election which held at Dan Anyim Stadium in Owerri, the Imo state capital, on Sunday.

Ohanaeze Ndigbo is an apex Igbo socio-cultural group in Nigeria.

The group represents all Igbo communities within and outside Nigeria. Igbos by census, represent one of the three largest ethnic groups in Nigeria.