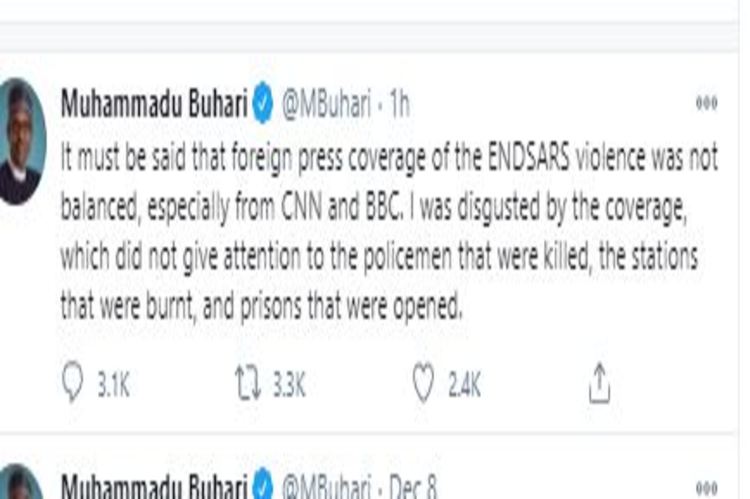 President Muhammadu Buhari has expressed his displeasure over the coverage of the #EndSARS protests by foreign media platforms.

According to the president, the CNN and BBC failed to balance their stories by not giving attention to the cops killed and police stations razed in the aftermath of the protests.

“It must be said that foreign press coverage of the ENDSARS violence was not balanced, especially from CNN and BBC.

“I was disgusted by the coverage, which did not give attention to the policemen that were killed, the stations that were burnt, and prisons that were opened,” the president tweeted @MBuhari on Wednesday.

Minister of Information and Culture, Lai Mohammed, had faulted CNN’s report on the Lekki toll gate shootings and threatened action.

The #EndSARS protests, which took place in October, were hijacked by hoodlums leading to the destruction of properties and loss of lives.

The demonstrations also turned bloody in Lagos on October 20, 2020 when men in military uniform opened fire on young protesters at the Lekki toll plaza, an epicentre of the protests in Lagos.

Thousands of prisoners were also set free during the riots that followed.