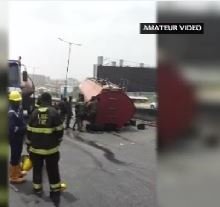 In what would have been another disaster on the Otedola Bridge, a tanker fully loaded with 40,000 litres of Premium Motor Spirit discharged its content causing panic in Lagos.

According to reports, the tanker disconnected from the truck’s head and in the process spilled its content.

There was however no explosion as a result of the incident as emergency officials were swiftly mobilized to the scene.

The Lagos State Fire Service personnel and the state Emergency Management Agency officials as well as officials of the Federal Road Safety Corps were present to manage the situation.

The incident locked down the Lagos-Ibadan expressway as traffic gridlock piled up while the recovery operation was ongoing.