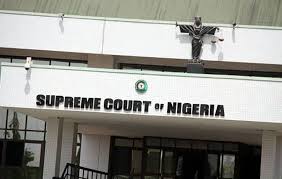 The Supreme Court has fixed Wednesday for the hearing of the All Progressives Congress’ application for a review of its judgment which overturned its victory in the last governorship election in Bayelsa State.

According to reports, the parties to the case have been served with the notice for the scheduled hearing.

The disputed apex court’s judgment was delivered barely 24 hours to the inauguration of the party’s governorship candidate, David Lyon, and his running mate, Biobarakuma Degi-Eremienyo.

The five-man panel of the court led by Justice Mary Peter-Odili disqualified Mr Eremienyo’s candidacy and ruled that the disqualification had rendered the joint ticket a nullity.