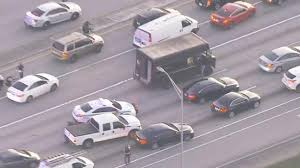 An armed robbery at a Florida jewelry store Thursday led to the hijacking of a UPS truck and a massive police chase that ended in a fatal shootout in Broward County.

Four people were killed- the two robbery suspects who stole the truck, the UPS driver and a bystander.

The suspects hijacked the UPS truck, took the driver hostage and sped away.

The truck led police on a long chase as it sped along multi-lane roads and through intersections.

The incident came to an end when the truck encountered stopped traffic at an intersection.

Sowore, Bakare arrive in court after their release from DSS custody (PICTURES)