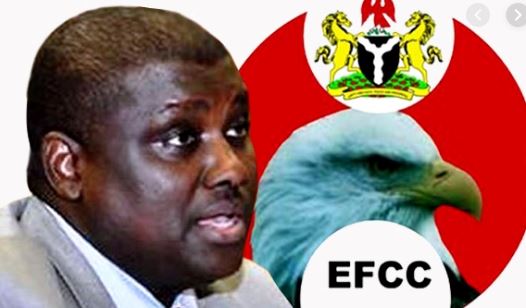 A Federal High Court in Abuja has ordered the temporary forfeiture of twenty three properties linked to the former chairman of the Pension Reform Task Team, Abdulrasheed Maina.

Trial judge, Folashade Ogunbanjo, gave the order while ruling on a motion filed by the Economic and Financial Crimes Commission.

In the suit, the anti-graft agency also sought an order to publish an advert on the properties in a national daily. This is to enable anyone who is against the move to come forward and prove otherwise.

Justice Ogunbanjo granted the request of the anti-graft agency, ordering it to return to the court on the 19th of November.

Abdulrasheed Maina was arrested in Abuja earlier this month by the Department of State Services, along with his twenty-year-old son, Faisal.

This was after a four-year manhunt for his involvement in a two billion naira pension fraud.