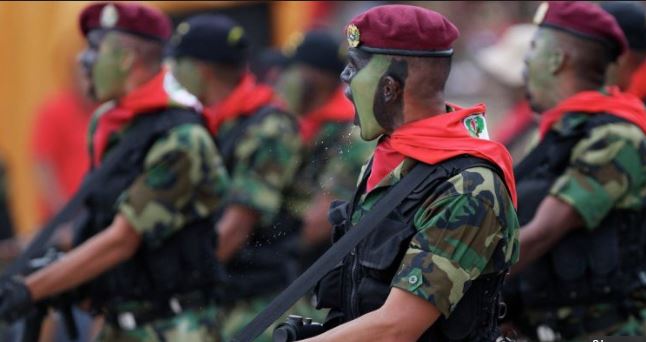 Venezuelan military officers blocked a bridge on the border with Colombia ahead of an anticipated humanitarian aid shipment Tuesday, as opposition leader Juan Guaido stepped up his challenge to President Nicolas Maduro’s authority.

The opposition-dominated National Assembly had earlier warned the armed forces, which make up much of Maduro’s power base, not to cross a “red line” by blocking aid.

Guaido, who proclaimed himself acting president on January 23 — sparking an international crisis — claims that up to 300,000 people face death if the aid is not delivered.

“You know there’s a red line, you know well there’s a limit, you know that medicines, food and medical supplies are that limit,” lawmaker Miguel Pizarro said in a message to the military.

Maduro, though, said humanitarian aid would be the forerunner of a US-led invasion, insisting that “no one will enter, not one invading soldier.”

Franklyn Duarte, an opposition lawmaker from the border state of Tachira, told AFP that troops from the armed forces were blocking the crossing.

The aid delivery was being coordinated by Guaido, who has declared himself interim president of the oil-rich country and now enjoys the backing of some 40 countries as Venezuela’s legitimate leader.

Maduro, 56, has repeatedly accused the United States of fomenting a coup.

The US, which has not ruled out a military intervention in crisis-wracked Venezuela, was the first to recognise him as acting president, followed by a dozen Latin American countries.

In his State of the Union address Tuesday night, President Donald Trump reaffirmed US support for Guaido, saying “we stand with the Venezuelan people in their noble quest for freedom.”

Britain, France, Germany and Spain were among 20 EU nations to side with Guaido this week after Maduro ignored their demands that he announce new presidential elections by February 3