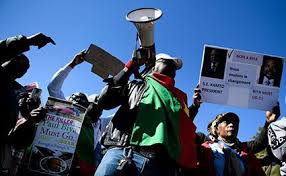 Official results of the October 7 ballot declared President Paul Biya, who has ruled the West African country since 1982, the winner with 71 percent of the vote.

Kamto, candidate for the Movement for the Rebirth of Cameroon (MRC), rejected the result, claiming widespread fraud.

One of seven candidates who had sought to unseat the 85-year-old Biya, Kamto has been declared an “outlaw” by the government.

A senior MRC official, Emmanuel Simh, said 38 people were arrested on Sunday during protests in the western town of Bafoussam.

MRC members had announced they planned to stage a protest in Bafoussam against what they called the election “hold-up.”

“After having been repressed with rare violence during their peaceful march, they were subjected to even harsher arrests,” Kamto’s spokesman Olivier Nissack said on his Facebook page.

He vowed that “peaceful national resistance” will continue.

Leicester helicopter crash will forever remain with me – Schmeichel