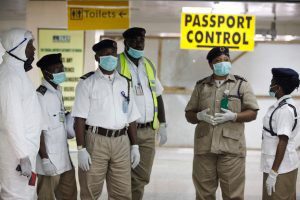 Two more people have died from Ebola in Democratic Republic of Congo, authorities said on Tuesday, as aid agencies battled to persuade sceptical residents about the severity of an outbreak that has killed 27 since April.

One of the deaths occurred in Mbandaka, according to a daily healthy ministry bulletin. A nurse also died in the village of Bikoro, the town near where the outbreak was first detected in early May.

At the central market in Mbandaka, where vendors in colorful fabrics hawk smoked monkeys, some residents said they were unmoved by warnings not to consume bush meat since a case of Ebola was discovered in the city of 1.5 million last week.

“Despite your Ebola stories, we buy and eat monkey meat,” said one woman named Carine, a mother of eight children. “We have eaten that since forever. That is not going to change today. Ebola, that’s in Bikoro.”

Experts who have studied the Ebola virus since its discovery in 1976 along the Ebola river in Congo, then Zaire, say its suspected origin is forest bats. Links have also been made to the carcasses of freshly slaughtered animals eaten as bush meat.