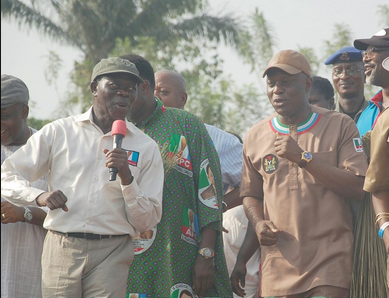 All Progressives Congress (APC) Stakeholders in Adamawa State have predicted the defeat of Comrade Adams Oshiomhole by the incumbent National chairman John Odigie-Oyegun, if the
controversial results of the ward congresses in some states are allowed to stand. According to them, many APC governors manipulated last weekend’s ward congresses to favour Oyegun so as to eventually humiliate President Buhari.

Correspondent Owolabi Adenusi’s reports that major stakeholders in All Progressives Congress in Adamawa state took to the streets of Yola in protest against results of the last Sunday ward
congresses.

The stakeholders who headed for Independent National Election Commission office where they handed over a petition, alleged that there was no election in all the wards in the state. They
urged APC National leaders to act fast before it is too late. .

Some party chieftains who spoke to TVC News argued that governor Jibrilla Bindow is working against the interest of the party to pave way for the realization of Atiku Abubakar’s presidential ambition.

Having taken their protest to INEC and the party’s Appeal Committee for justice, the protesters said they are hopeful that justice will be served.