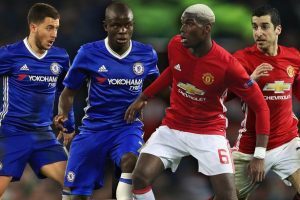 Manchester United will play Chelsea in the 2018 FA Cup Final.

The Reds booked their place in the prestigious final following their excellent 2-1 victory over Tottenham at Wembley.

Goals from Alexis Sanchez and Ander Herrera cancelled out Dele Alli’s early strike as Jose Mourinho’s men battled from behind to book their place in the Wembley showpiece.

Mourinho will now face his former side Chelsea in the final after the London side defeated Southampton 2-0 in the other semi-final match.

Goals from Olivier Giroud and Alvaro Morata were enough for Antonio Conte’s side to book their place in the final.

United will be equalling Arsenal’s appearance record when they line-up for their 20th FA Cup final next month, and the Reds know one more win will also see them equal The Gunners record as the most successful team in FA Cup history with 13 wins..