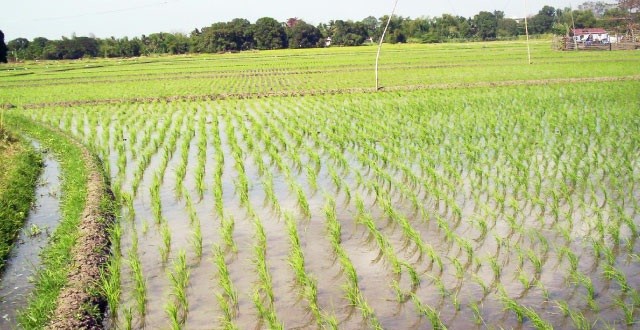 Kebbi State Governor, Abubakar Bagudu has called for more investment in Agriculture in his State, especially in rice production. He  disclosed this to a team of journalist who accompanied the Information Minister  Lai Mohammed to Kebbi State.

Oryza sativa, as it is botanically called, rice  is a staple food consumed by Nigerians, both the rich and the poor and is one of many foods  served all over the country.

The country’s high consumption of this food made it difficult for farmers to meet up to local demands, resulting in an increased rate of rice importation in the country.  But this has changed in recent times with Nigeria’s rice importation now officially dropping by about 90 percent causing the country to attain self sufficiency in rice.

Kebbi State, one of the largest rice producing states in the country, has several hectares  of rice farms scattered across 16 local government areas in the State with all expected to produce about 2.5 million metric tonnes per year.

The State’s giant strides in agriculture, especially in rice farming has led to several investments in the State, as well as the establishment of several rice mills.

The Federal Government expresses delight on these new  achievements  saying it is a fall out of President Muhammadu Buhari’s initiative, the  Anchor Borrowers Programme,  designed to support farmers.

Meanwhile, the Governor of Kebbi State is still advocating for more investment in Agriculture in his state especially in Rice production.  This, he says will reduce poverty in the country, ensure food security, provide empowerment as well as basic education for many out of school children in the country.

Nigeria’s Rice revolution has gradually become a success story, bringing with it an assurance that the country can feed itself.

How infertility treatment has left sperm science behind