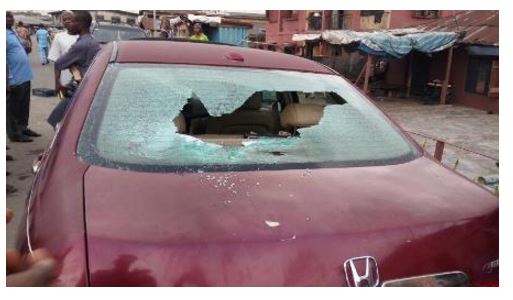 They were said to have fired gunshots and flung bottles, cutlasses at will along Lawanson Road in Surelere, injuring passersby.

Although the cause of the fracas was yet unknown, the hoodlums scared motorists and pedestrians between Charity Bus Stop and Afariogun on Oshodi-Apapa Expressway, when they started flinging bottles at opposite directions.

As at 8am Wednesday, soldiers attached to Operation Mesa and anti-riot policemen were seen at strategic locations at the affected areas to prevent degeneration.

An eyewitness, John Udoh said: “It was like war situation. Gunshots were fired and we took cover in our home. Many vehicles were smashed. My car was badly damaged. My landlord’s car was touched. Two of my neighbors, who were coming back from night duty, were seriously injured. I don’t know what they are fighting for but I think it was a battle of supremacy.

According to one Ebrison Akpan over 20 persons were injured at the fight in Mushin, including traders.

He claimed that street urchins took advantage of the fight to unleash mayhem on passersby.
“They also used the opportunity to rob innocent people. My friend, Ayim lost his tricycle to the hoodlums,” said Akpan.

Contacted, the command’s spokesman, Olarinde Famous-Cole said no life was lost.
He confirmed there was a fight at Ladipo Market in Mushin, but added that he was unaware of the Oshodi and Lawanson fracas.

Famous-Cole said: “It was a minor dispute among traders. Area D commander, DPO, and patrol team responded to the scene. They had a meeting with all the parties and stakeholders in the market. They were warned to maintain peace. Normalcy has returned to the place and the Commissioner of Police had order a continuous police presence in the area. I am not aware of the other locations you mentioned.

“The only incident I know about in Surulere is a case id robbery, where two suspects were arrested. The suspects were almost being lynched but police moved in and rescued them. They were taken to LUTH.”