Tunisia Agrees to Take Back 1,500 Migrants from Germany

Chancellor Angela Merkel said on Friday Tunisia had agreed to take back 1,500 rejected Tunisian migrants from Germany, after an attack by a Tunisian on a Christmas market in Berlin which killed 12 people. 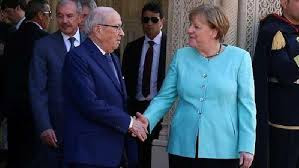 Merkel had told Tunisia she wanted to speed up repatriation of failed asylum-seekers after Islamic State supporter Anis Amri drove a truck through the market in December.

Merkel has come under heavy pressure for policies that allowed a million refugees into Germany in two years.

“We have agreed with Tunisia to send back 1,500 Tunisians in Germany who have been refused (permission) to stay in Germany,” Merkel said at a news conference with Tunisian President Beji Caid Essebsi in Tunis.

“Those who want to return voluntarily will be able to receive aid.”

Essebsi said Tunisia would send a delegation to verify the identities of those returning. German authorities have detained another Tunisian man they suspect of involvement in the truck attack.

Osinbajo pleads with Foreign Airlines to use Kaduna Airport