TVC NEWS U.S. President Donald Trump says he wants to build dozens of new warships in one of the biggest peace-time expansions of the U.S. Navy. But interviews with ship-builders, unions and a review of public and internal documents show major obstacles to that plan.

The initiative could cost nearly $700 billion in government funding, take 30 years to complete and require hiring tens of thousands of skilled shipyard workers – many of whom don’t exist yet because they still need to be hired and trained, according to the interviews and the documents reviewed.

Trump has vowed a huge build-up of the U.S. military to project American power in the face of an emboldened China and Russia. That includes expanding the Navy to 350 warships from 275 today. He has provided no specifics, including how soon he wants the larger fleet. (For graphics on projected strength of U.S. Navy, shipyard employment see: tmsnrt.rs/2n3vOr0)

The Navy has given Defense Secretary Jim Mattis a report that explores how the country’s industrial base could support higher ship production, Admiral Bill Moran, the vice chief of Naval Operations with oversight of the Navy’s shipbuilding outlook, told Reuters.

He declined to give further details. But those interviewed for this story say there are clearly two big issues – there are not enough skilled workers in the market, from electricians to welders, and after years of historically low production, shipyards and their suppliers, including nuclear fuel producers, will struggle to ramp up for years.

To be sure, the first, and biggest, hurdle for Trump to overcome is to persuade a cost-conscious Congress to fund the military buildup.

The White House declined to comment. A Navy spokeswoman said increases being considered beyond the current shipbuilding plan would require “sufficient time” to allow companies to ramp up capacity.

The two largest U.S. shipbuilders, General Dynamics Corp (GD.N) and Huntington Ingalls Industries Inc (HII.N), told Reuters they are planning to hire a total of 6,000 workers in 2017 just to meet current orders, such as the Columbia class ballistic missile submarine.

General Dynamics hopes to hire 2,000 workers at Electric Boat this year. Currently projected order levels would already require the shipyard to grow from less than 15,000 workers, to nearly 20,000 by the early 2030s, company documents reviewed by Reuters show.

Huntington Ingalls, the largest U.S. military shipbuilder, plans to hire 3,000 at its Newport News shipyard in Norfolk, Virginia, and another 1,000 at the Ingalls shipyard in Mississippi this year to fulfill current orders, spokeswoman Beci Brenton said.

Companies say they are eager to work with Trump to build his bigger Navy. But expanding hiring, for now, is difficult to do until they receive new orders, officials say.

“You can’t hire people to do nothing,” said Jill Mackie, spokeswoman for Portland, Oregon-based Vigor Industrial LLC, which makes combat craft for the Navy’s Special Warfare units. “Until funding is there … you can’t bring on more workers.” 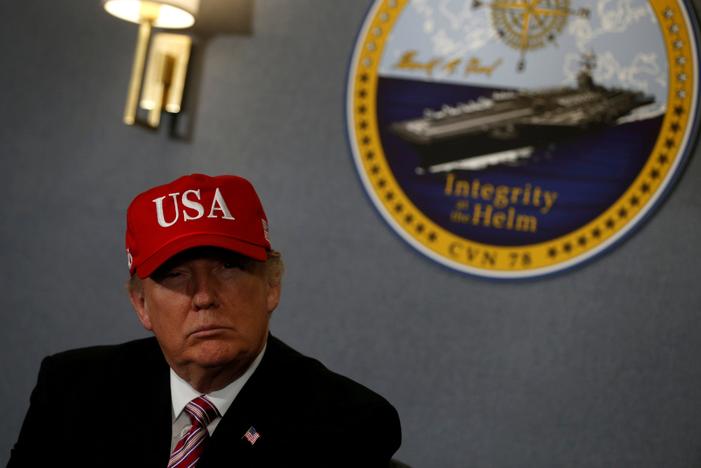 Because companies won’t hire excess workers in advance, they will have a huge challenge in expanding their workforces rapidly if a shipbuilding boom materializes, said Bryan Clark, who led strategic planning for the Navy as special assistant to the chief of Naval Operations until 2013.

Union and shipyard officials say finding skilled labor just for the work they already have is challenging. Demand for pipeline welders is so strong that some can make as much as $300,000 per year, including overtime and benefits, said Danny Hendrix, the business manager at Pipeliners Local 798, a union representing 6,500 metal workers in 42 states.

Much of the work at the submarine yards also requires a security clearance that many can’t get, said Jimmy Hart, president of the Metal Trades Department at the AFL-CIO union, which represents 100,000 boilermakers, machinists, and pipefitters, among others.

To help grow a larger labor force from the ground up, General Dynamics’ Electric Boat has partnered with seven high schools and trade schools in Connecticut and Rhode Island to develop a curriculum to train a next generation of welders and engineers.

“It has historically taken five years to get someone proficient in shipbuilding,” said Maura Dunn, vice president of human resources at Electric Boat.

It can take as many as seven years to train a welder skilled enough to make the most complex type of welds, radiographic structural welds needed on a nuclear-powered submarine, said Will Lennon, vice president of the shipyard’s Columbia Class submarine program.

The Navy envisioned by Trump could create more than 50,000 jobs, the Shipbuilders Council of America, a trade group representing U.S. shipbuilders, repairers and suppliers, told Reuters.

The U.S. shipbuilding and repairing industry employed nearly 100,000 in 2016, Labor Department statistics show. The industry had as many as 176,000 workers at the height of the Cold War in the early 1980s as the United States built up a fleet of nearly 600 warships by the end of that decade.

Apart from the labor shortage, there are also serious capacity and supply chain issues that would be severely strained by any plan to expand the Navy, especially its submarine fleet.

Expanding the Navy to 350 ships is not as simple as just adding 75 ships. Many ships in the current 275-vessel fleet need to be replaced, which means the Navy would have to buy 321 ships between now and 2046 to reach Trump’s goal, the Congressional Budget Office said in a report in February.

The shipyards that make nuclear submarines – General Dynamics’ Electric Boat in Groton, Connecticut, and Huntington’s Newport News – produced as many as seven submarines per year between them in the early 1980s. But for more than a decade now, the yards have not built more than two per year.

The nuclear-powered Virginia class and Columbia class submarines are among the largest and most complex vessels to build. The first Columbia submarine, which is set to begin construction in 2021, will take seven years to build, and two to three additional years to test.

Retooling the long-dormant shipyard space will take several years and significant capital investments, but a bigger problem is expanding the supply chain, said Clark, the former strategist for the Navy and now a senior fellow at the Center for Strategic and Budgetary Assessments.

Makers of submarine components such as reactor cores, big castings, and forgers of propellers and shafts would need five years to double production, said a congressional official with knowledge of the Navy’s long-term planning.

“We have been sizing the industrial base for two submarines a year. You can’t then just throw one or two more on top of that and say, ‘Oh here, dial the switch and produce four reactor cores a year instead of two.’ You just can’t,” the official said.

In his first budget proposal to Congress on Thursday, Trump proposed boosting defense spending by $54 billion for the fiscal 2018 year – a 10 percent increase from last year. He is also seeking $30 billion for the Defense Department in a supplemental budget for fiscal 2017, of which at least $433 million is earmarked for military shipbuilding.

A 350-ship Navy would cost $690 billion over the 30-year period, or $23 billion per year – 60 percent more than the average funding the Navy has received for shipbuilding in the past three decades, the Congressional Budget Office said.

Senator John McCain, chairman of the Senate Armed Services Committee, who will have a major say in approving the defense budget, said in a statement to Reuters that he supported Trump’s vision to increase the size of the Navy to deter adversaries.

“However, this is not a blank check,” he said.