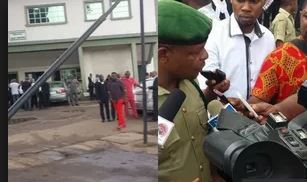 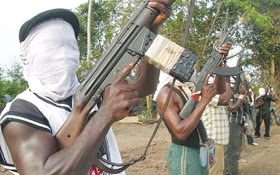 A rare incident happened in Owerri High Court in Imo state on Friday as more than six gunmen stormed the courtroom and whisked away a suspect believed to be their member.

Henry Chibueze alias Vampire has been on trial since July 2015.

Five people got seriously injured during the attack.

An eyewitness says the assailant shot sporadically for ten minutes as soon as prison vans brought the suspect and other 50 inmates into the court.

Inmates, security operatives and people scampered for safety when the shooting began, leaving many in the pool of their blood.

Speaking to Journalists in the court premises, the Public Relations Officer of the Nigerian Prisons Service Imo State command, Maduka James confirmed and expressed worry over the whole saga.